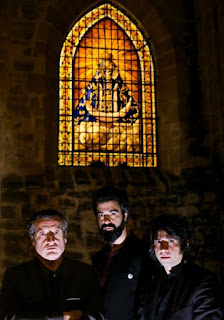 Guadalupe Plata have a sound so refined and pure it conjures images of of the Mississippi Delta, their dirty riffs transporting you there. The first sign that this is something different hits you with the first vocal and the origins of the sound soon become ambiguous.

“Our name comes from our hometown’s patron, the virgin of Guadalupe, so she protects us as we play the devil’s music,” they say. “Our music inhabits that place in our collective imagination where the demonic force straddles the blues and cante jondo.”

Hailing from the Spanish town of Ubeda, made famous for Spaghetti Western films, the trio are bringing their music to the UK in their first UK tour this September. Having received great acclaim from numerous critics, coupled with prizes won at the Impala Awards and Independent Music Awards, these are not ones to miss. Their lives sets are an experience beyond most, playing out tunes on cigar box guitars, coffee can percussion and even an electrified washtub bass!

The tour follows the release of their latest 'Red Album' which was released earlier this year on Everlasting.

You can catch Guadalupe Plata at the following dates and venues: