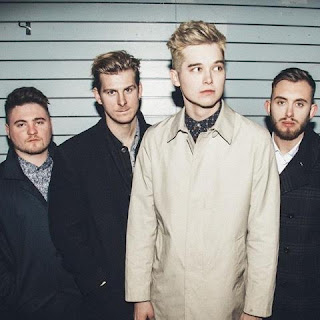 On Saturday Jordan Allen had their biggest headline show to date at The Ruby Lounge in Manchester.

Having spent a good few years as a solo artist, Jordan Allen recruited his fellow band members late 2015. Wasting no time this outfit have created a set of live songs to showcase their talent of writing exuberant indie wonders. Having received great reviews of their packed-out gig at this years Dot To Dot festival and being given  a slot on Radio-X's playlist, demand to see the band grows.

The Ruby Lounge is a great gig venue in Manchester; entering down off the street, you descend the steps into a basement bar and dark gig space. When I arrived Laura Esther was warming up the crowd with some really nice acoustic music, backed by a violinist and box drummer. The tracks I heard reminded me of Gogol Bordello with an almost Gypsy Punk feel. Saytr Play took to the stage next, taking things up a level with some lively Indie guitar tracks. The crowed filled in from the bar within the first song, and by the end the crowd were dancing along. Make sure you check out their track 'Rebound' on YouTube.

With the crowd eager for more music, front man Jordan Allen opened the set with some solo verses, an ode to one of his idols John Cooper Clarke. Quickly bursting into their set you can see why people are listening. The first song is 'Remembered', penned when Jordan performed solo. Its the bands 'I Wanna Be Adored' and naturally the perfect opener. It is the statement behind the headline gig with its memorable lyrics 'I wanna be remembered, I wanna be seen, not just another woulda, coulda, should have been'. Keen to share new music, the band also played 'Rosie' which had all the makings of an Indie hit.

The audience bounced as they played through their set, singing along to 'Helter Skelter' and 'White Lines' and crowd members climbing on each others shoulders to dance through the bands final song of the night 'Set In Stone'.

With an arsenal of great tacks that stick in your mind, coupled with a growing lively crowd; Jordan Allen are one to see live.

Listen to their single 'Too Much Too Soon' below.