Below is the new video from Mercury Prize nominees Alt J for the track 'Fitzpleasure' from their debut album 'An Awesome Wave'.


Alt J - Fitzpleasure
It seems everything is happening for this band right now. After a summer of festivals they are receiving positive attention from not only the indie alt scenes, but with the charts and music critiques. It seems they are taking advantage of the well deserved attention and are set to claim 2012 and 2013 as theirs with extensive tours.

The tour dates are as follows:

Check out this new release from Green Day called 'Let Yourself Go'.
For people who have followed Greenday over the decades, this track will bring back some nostalgic feelings. Its still very much the Greenday of today with the level of production and hint of theatricality (random solo), but the instant feel you get from the simple chord sequence, fast bass and drums; you cant help but think of the early 2000's.
Posted by Matt at September 06, 2012 No comments:

Before you judge; listen.
Labrinth - Treatment
Labrinth is not normally the type of artist i would usually post about seeing as he is mainly pop/rap/notsureofhisgenreactually. But wow... listen to that opening. It sounds like it could be right off a white lies album, and the vocals in the opening, they're quite good right up until it becomes another chart song. If the chorus was half as good as that opening synth riff, then this would be one dangerously good song.
Does anyone out there fancy doing some sampling and make something epic with that opening?
Please.
﻿
Posted by Matt at September 06, 2012 No comments: 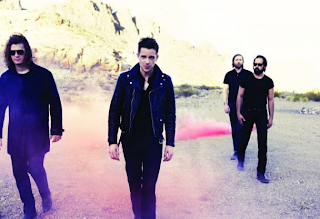 The Killers have announce that they are going on a full UK tour, and it is starting in just over a month and a half!
The tour is set to follow the release of their new album 'Battle Born' which is out on September 17th.
The Tour dates are as follows and tickets go on sale this Friday:

Ellie Goulding - Anything Could Happen

Wow.
I was driving home from work the yesterday and 'Anything Could Happen' came on the radio. Instantly i knew, I got that feeling that this was something good and I needed to pay attention, turn it up and enjoy.
It is beautifully simple. A combination of a pulsing synth bass, sweeping synthscapes and catchy hooks and melodies, all culminating at in the chorus to make something perfect.
If youre a fan of Oh Land, IAMWHOAMI, paloma faith (for the vocals) then check this track out.
Ellie Goulding - Anything Could Happen﻿
Posted by Matt at September 01, 2012 No comments: