'The Only Band Ever' Alexisonfire, Split. 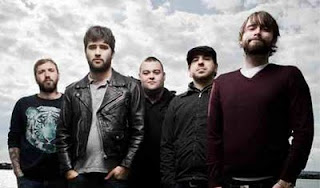 "Was the break up amicable? Not really. Was it necessary? Probably. Regardless, the members of this band are my family and I wish them nothing but good fortune." - George
After nearly 10 years together as a band, Alexisonfire have split. The decision came about after Dallas Green had decided to leave the band to focus on his other project 'City and Colour' and now Wade has left to play in another band. At first the band considered finding a replacement for Dallas, but with the recent departure of Wade, the rest of the band have decided to close the curtain on Alexisonfire.
The band are planning to do a farewell/10 year anniversary tour of their home country Canada, although this is still in the planning stages.
The split was announced yesterday by lead singer George Pettit on the band website http://www.theonlybandever.com/ which he thanks fans for their support, describing them as 'the coal that stoked their engine'.

Pettit concludes the message by telling fans to"Take solace in the fact that you live in one of the most exciting musical eras. Try to support some of your local independent artists in the same way that you supported us. A life of musical exploration is a rich and fulfilling one."

Its sad to know that there will be no more releases to look forward to, but they leave a catolouge of albums I know i will enjoy listening to over and over.

Here are some of my favourite Alexisonfire songs: