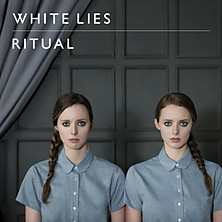 Personally I think this is a great album and enjoy how you can see the bands influences though out; Depeche Mode, OMD, Joy Devison, Human League and peers such as Editors.

One of my favourite tracks on the record is Streetlights, the synth and bass echo the sound of early Gary Numan; also not to forget the awesome first single "Bigger than us"

Hopefully the bands success will continue to grow with this great album and in two years time or less, I will be writing about another release.

Definitely an album for the collection.
Posted by Matt at January 20, 2011