http://www.thegoteam.co.uk/
The Go! Team release single 'Buy Nothing Day' today. The single is taken from their coming album "Rolling Blackouts" which is set to be released next Monday. You can also catch them on tour in February across the UK. 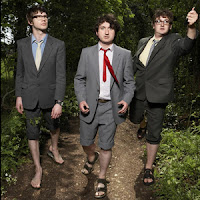 www.myspace.com/theyoungknives
Young Knives have announced they are releasing "Ornaments from the silver arcade" on April 4th and are also set to tour around the release of the album. The track listing for the album is:
'Love My Name'
'Woman'
'Everything Falls Into Place'
'Human Again'
'Running From A Standing Start'
'Sister Frideswide'
'Vision In Rags'
'Go To Ground'
'Silver Tongue'
'Storm Clouds'
'Glasshouse'
Posted by Matt at January 24, 2011