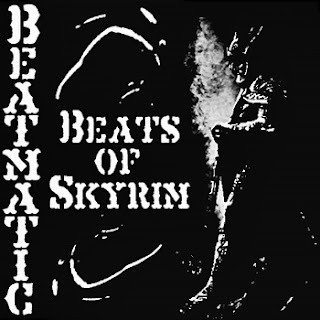 Proud to post another local artist on here. This time it is Beatmatic, a guy I spent some good years of high school with and who has clearly gone on to make some cool music.

'Beats of Skyrim' is an album compiled using samples from the soundtrack of the increasingly popular Skyrim.

Here's a little interview with Beatmatic. Open up the link below and have a listen while you read, you wont be disappointed.
http://beatmatic.bandcamp.com/

What brought you to make this album and what were your influences?

"Last year when Skyrim came out, I immediately got hooked to it , it's a very addictive game if you have played it! One of the things that finishes off the atmosphere is the epic soundtrack, so I did some research and found out who Jeremy Soule(the guy who made the soundtrack) is and then I bought the soundtrack and it was even better than I expected. I thought, why not make an album with all these amazing tracks. I sample but try to do it in a way that removes it from the original to create something completely different. I achieve the results through playing with pitch and effects to make the sound unrecognisable. I  then chop it up and play it in a way as to make new rhythms. Once that is done its a matter of putting it all together to make trippy, chilled electronic hip-hop."


I take inspirtaion from all types of music, but the biggest ones are Flying Lotus(for experimenting with sounds that shouldn't really fit), Tool(they make crazy trippy prog-rock), 9th Wonder(for the sampling) and Orrest(a personal friend and an inspiring music artist who gave me a lot of inspiration).

In future I would like to perform a visual/audio nights in Manchester. I don't want to sign to a label as I love my artistic freedom and I don't ever want to get famous, I just want my music to represent me not me trying to represent my music and hopefully one day I can perform to a ton of people; that would be awesome.


Thanks to Beatmatic for the interview.

Be sure to check out this album. It has something for everyone, my personal favourite is the bass pounding 'The Fallen'. Its short but so so sweet! Another favourite of mine is opening track 'Unbound', it is impossible not to get caught in the sway of the beat.

For a download of 'Beats of Skyrim' check out the link below.
http://beatmatic.bandcamp.com/

Also, if you would like more information on Beatmatic or would like me to put you in touch, head over to the contact section and let me know.
Posted by Matt at May 19, 2012