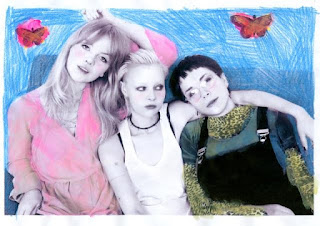 Dream Wife are a London based 3 piece making unadulterated Alt-pop, filled with raw guitar hooks, sweeping vocals and a beat that doesn't quit.

'Hey Heartbreaker' is the bands debut single and I really like it. I love how the track opens, a few rattles on the snare and then you are dropped into the thick of it. I could see this working perfectly to open a film, like 'Empire Records' or 'High Fidelity'; something cool, something that needs an all killer no filler soundtrack. That's why this song works, it has a timeless quality that brings an instant likeability and fits seamlessly with the best of your music.

'Hey Heartbreaker' is the opening track from their self titled EP, due for release March 11th via Cannibal Hymns.