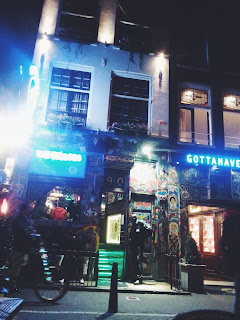 Here is some music I have been listening to and enjoying today.

When I heard 'Till the end' by Lucy Rose as I was driving back from my dinner break at work and before even knowing who I was listening to, the sound was turned right up and the song blasting through the speakers. I love the euphoric feel that kicks out from the drum pattern in the chorus (bum bum tat, ba bum, bum tat), it has a feel of 'Pure Shores' by All Saints, which is also a euphoric gem best played loud. The presence of this awesome chorus also emphasises the head bobbing, piano graced verses. As always  with Lucy Rose, the vocals are beautiful and emotive and carry the lyrics perfectly.


LUSTS aren't a band I am familiar with, but they were playing on BBC6 when I got home and Shazam pointed me in the right direction. The band definitely fall into the recent grunge/lofi/shoegaze revival, but they do it well, really well actually. After Shazam showed the way, I went to their Youtube account to find they have a collection of songs on there, each as good as the next. I like the use of synth which softens and carries the guitar through and strengthens their sound in a big way. I have also read that their debut album is out on October 23rd, which should be worth checking out.


'Ocean Drive' by Duke Dumont is a song best played at bass thumping levels. I love this track because of the bass line that ebs through from the moment it kicks in.

My Dad phoned tonight and naturally we ended up talking music; he recommended this track. In a recent interview Kele said there's no other musicians he can really compare this track to, where as in the past they could; this is very much their own track. Listening to it I agree, I was thrown a little at first, you try to decipher the sound and find familiarity, which apart from Kele's distinctive vocals, there aren't any. This doesn't mean the track fails, if anything it means the opposite. It means that yet again, Bloc Party have returned with an exciting fresh new sound. 'The Love Within' will feature on the bands upcoming 5th album, due early 2016.


'Almost home' just feels right. Listening, my breathing slows and I submerge below the sound waves as the track washes over. I imagine its impossible to hear this track and feel nothing. A great track to end a Mixtape with.